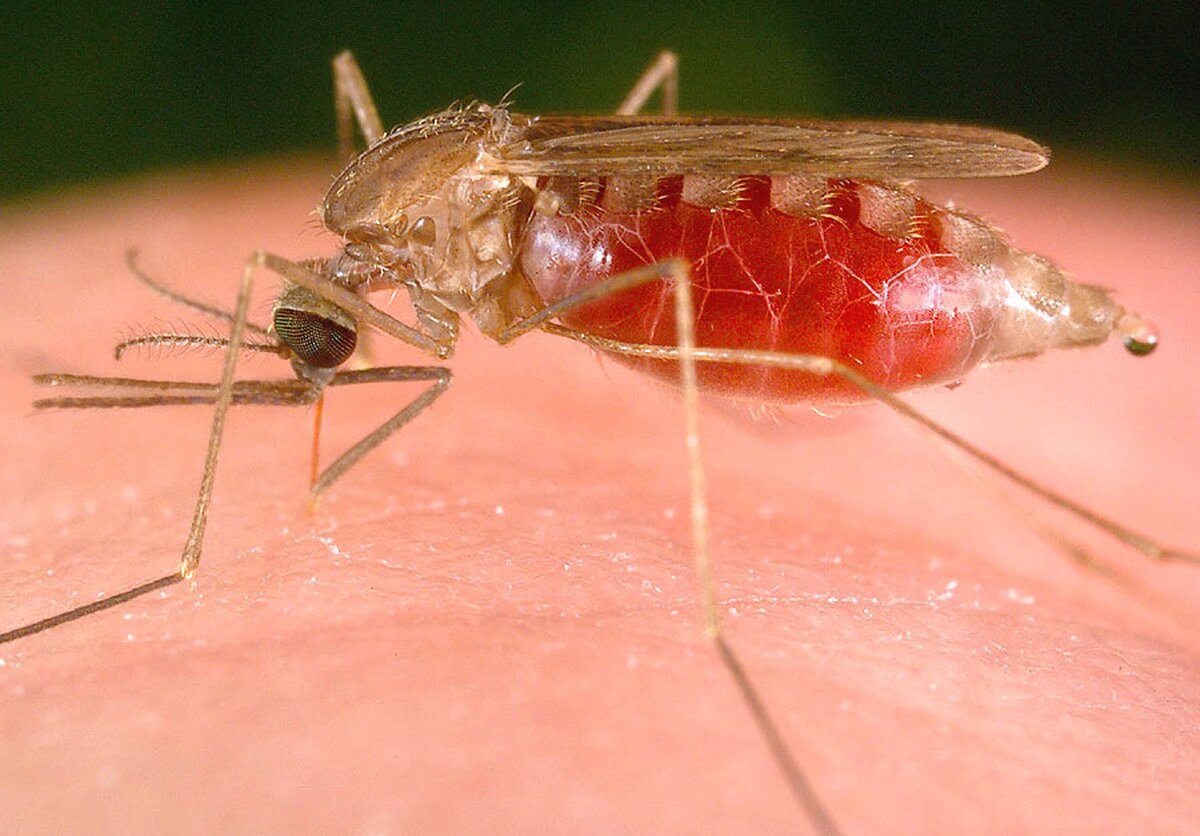 Malaria is an acute protozoan disease characterized by febrile seizures, anemia, enlarged liver and spleen. Relapses are possible. The source of infection is only a person with malaria, or a gamete carrier. Infection is transmitted by various types of mosquitoes. 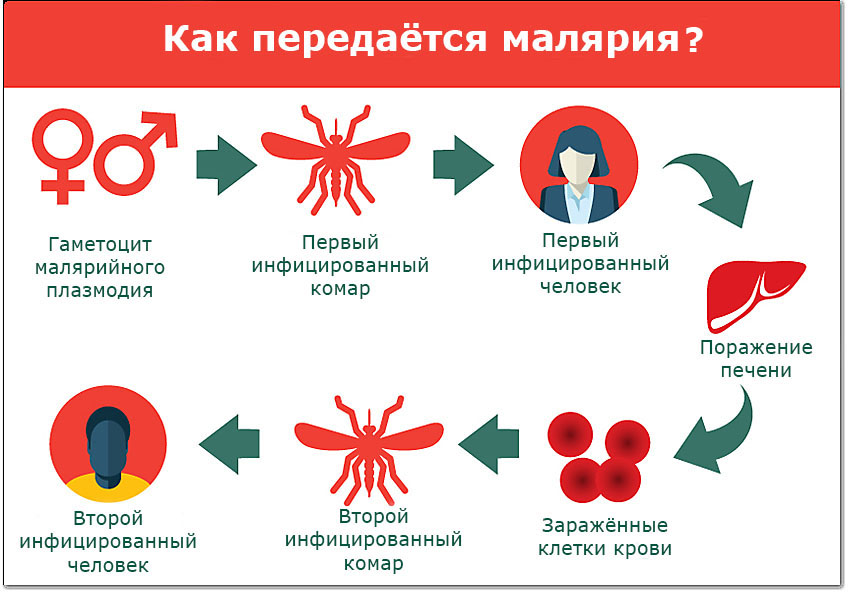 4 types of pathogens cause human malaria; Plasmodium falciparum – the pathogen of tropical malaria, P. vivax – the pathogen of three-day malaria (vivax-malaria), P. ovale – the pathogen of ovale-malaria, and P. malariae – the pathogen of four-day malaria. Plasmodia of malaria undergo a complex development cycle in the body of the vertebral host (tissue and erythrocytic schizogony) and in the body of the mosquito-carrier (sporogony). In case of infection due to a mosquito bite, sporozoites, which turn into tissue schizonts in the liver cells, penetrate the body. They repeatedly divide and form a large number (up to 50 000 from each schizont) of tissue merozoites. The duration of the pre-erythrocytic cycle is from 6 to 9 days. Then the parasites penetrate the erythrocytes, and erythrocytic schizogony begins. The duration of schizogony in pathogens of four-day malaria is 72 hours, in the rest – 48 hours. Drug resistance of the pathogen of tropical malaria has great importance. In some countries of Southeast Asia, more than half of the strains of tropical malaria pathogens are resistant to chingamine (chloroquine, delagil), as well as to chloridine, acrychin, and quinine. Diseases caused by drug-resistant strains often take a protracted (over 50%) and malignant (3–5%) course. Drug resistance of tropical malaria pathogens has been reported in other regions. The pre-erythrocytic cycle of the parasite development is not accompanied by clinical manifestations. The onset of the seizure coincides in time with the moment of mass destruction of the affected erythrocytes and the release of the parasite into the blood. The seizure is a kind of reaction to a foreign protein that enters the bloodstream. The destruction of erythrocytes leads to anemia. The immunity in case of malaria develops only in relation to the homologous form of plasmodium.

The incubation period in case of the tropical malaria lasts 10–14 days, with a three-day malaria with a short incubation – 10–14 days, with a long – 8–14 months, with a four-day – 20–25 days. At the onset of the disease, the fever may be of the wrong type (initial fever), and only after a few days the correct alternation of seizures is established. During the seizure, periods of chills, heat and sweat are distinguished. Seizures usually occur in the morning with a maximum temperature in the first half of the day (with ovale-malaria, seizures begin in the evening after 18–20 hours). Chills come on suddenly and can be «terrific». Its duration is 1,5–2 hours. The duration of the entire seizure with three-day malaria and ovale-malaria is 6–8 hours, four-day malaria – 12–24 hours, with tropical malaria the seizure is long, and the apyrexial period is so short that it can be detected only by thermometry after every 3 hours. The period of chills is replaced by heat, and with the onset of a decrease in temperature, the patient begins to sweat heavily. His general condition quickly improves, he calms down and often falls asleep. During the ayrexial period the patient's general condition remains good, often he remains capacity for work. With a three-day, tropical and ovale-malaria seizures are repeated every other day, and with a four-day malaria – every three days. Fever during seizures usually reaches 40°C and above. After the first 2–3 seizures, an expressed increase in the liver and especially the spleen appears, it is painful during palpation. Often there is a herpetic rash. As a result of the breakdown of red blood cells, pallor and icteric colouring of the skin occurs. Without antiparasitic treatment, the duration of three-day malaria (with the exception of reinfection) reaches 2–3 years, tropical malaria – up to a year, and four-day malaria – up to 20 years or more.

In case of tropical malaria, hingamine (delagil, chloroquine) is prescribed: on the 1st day – 1 g, and after 6 hours another 0,5 g of the medication, then for 4 days 0,5 g/day. In case of the treatment of three- and four-day malaria, a three-day course of treatment with hingamine is first carried out: on the 1st day 0,5 g is given 2 times a day, on the 2nd and 3rd day – 0,5 g at one time. This course relieves malaria attacks, but does not affect tissue forms of the parasite. For radical treatment, immediately after the end of hingamine intake, a 10-day course of treatment with primaquine (0,027 g/day) or chinocide (0,03 g/day) is carried out. For the treatment of tropical malaria caused by drug-resistant plasmodium, quinine sulfate can be used in the dose of 0,65 g 3 times a day for 10 days in combination with sulfapyridazine: on the 1st day – 1 g, on the next 4 days – 0,5 g A combination of chingamine (on the 1st day 0,5 g 2 times a day, in the next 3 to 4 days 0.5 g/day) with sulfapyridazine (the 1st day 1 g, the next 4 days 0.5 g/day) is effective. Other medications are also used.

With uncomplicated forms of malaria the forecast is favorable. With rupture of the spleen and malaria coma, fatal outcomes are not rare.

Eliminating of mosquitoes-carriers, protecting people from mosquito bites (the use of repellents, nets). Chemoprophylaxis is carried out for people traveling to malaria-endemic areas (hingamine 0,25 g 2 times a week). The medication is prescribed 3 days before arrival at the site of disease and the intake is being continued for 4 to 6 weeks after departure. For those who have recovered from malaria, dispensary observation is carried out in accordance with the instructions.