The purpose of the Day is to achieve knowledge and, more importantly, understanding by patients and others that psoriasis is not an infectious disease

October 29 is designated in the international calendar as World Psoriasis Day. Its establishment in 2004 was initiated by the International Federation of Psoriasis Associations (IFPA).

This date primarily affects those people, who suffer from this disease, as well as doctors-dermatologists, who help people to treat it. It is addressed, however, to the entire world community, since statistics indicate that about 3% of the world's population suffer from psoriasis or psoriatic arthritis – a disease associated with damage not only to the skin, but also to human joints.

The establishment, organization and annual holding of events within World Psoriasis Day is aimed at drawing the attention of people, international medical and charitable organizations, foundations, public and private medical institutions of all countries to the problem of prevention, methods of diagnosis and treatment of this disease.

In addition, among the tasks set by the IFPA, there are also educational activities aimed at explaining to people how to prevent this disease; knowing their attitude to the so-called risk group, that is, to understand whether there is a predisposition to the disease.

The psychological state of those suffering from psoriasis is also an important work direction of the IFPA. Achieving knowledge and, more importantly, understanding by patients and others that psoriasis is not an infectious disease is an important task that contributes to solving the problem of psychological discomfort experienced by both the patient and the people around him.

Although psoriasis is one of the diseases that are completely incurable, it is amenable to control, and with proper treatment, its external manifestation can be insignificant and even passing. This is one of the most common skin conditions and can manifest itself at any age in the form of rashes, redness and flaking of the skin in certain areas of the body. Open areas of the body affected by rashes often cause certain psychological complexes that can become a barrier in the patient's communication with others. Moreover, this discomfort for the patient can become a factor aggravating the manifestation of the disease.

Genetically determined predisposition, as well as a number of factors contributing to the manifestation of psoriasis play an important role in the appearance of psoriasis. Among these factors, there are the dysfunction of the immune system, solar and X-ray irradiation, hormonal disorders, etc.

Proper treatment contributes to the fact that the period of remission, when the external manifestations of the disease become subtle or disappear at all, can be quite long and last up to several years. In some cases, psoriasis develops into a more complex and severe form, which is expressed in a joint disease – psoriatic arthritis.

The most important thing to remember not only on October 29, and what all medical specialists say: prevention is better than treatment! Therefore, take care of the nervous system, strive for positive emotions, do not neglect rest, walks in the open air and sane physical activity. 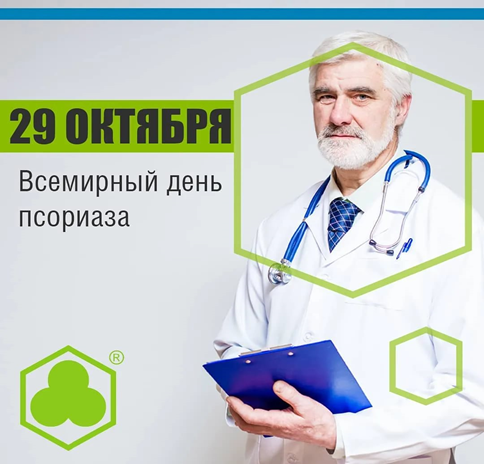