Mother's Day in Belarus is celebrated annually on October 14. This holiday was established by the Decree of the President of the Republic of Belarus dated July 30, 1996 and coincided with the holy day – the Intercession of the Theotokos. In 2021, the date is celebrated for the 26th time.

The family is not only a value, but also a social support. Mothers play an important role in its formation and existence. They are assigned a creative role, they lay the life guidelines for children, and this, in turn, strengthens the prestige of the family and leads to the full development of society and the state. In Belarus, this holiday is dedicated to the women who raise and bring up children.

There are several opinions about the origin of the holiday. According to some sources, the tradition of celebrating Mother's Day dates back to ancient Rome, the Romans dedicated three days in March (from 22 to 25) to the mother of the gods – eastern Cybele. The ancient Greeks paid tribute to the mother of all gods – Gaia. For the Celts, Mother's Day was the day of honoring the goddess Bridget.

From the 17th to the 19th century, “Mothering Sunday” was celebrated in Great Britain. On this day, young men and women who worked as apprentices or servants, returning home, brought a fruit pie as a gift to their mothers.

An analogue of the current holiday, Mother's Day, dates back to the 19th century in West Virginia, USA, where a young American woman, Anna Jervis, took the initiative to honor mothers.

According to other sources, the history of Mother's Day begins with the religious Orthodox holiday of the Intercession of the Theotokos. In 910, during the divine service, the Virgin Mary (many recognized her as the Mother of God) revealed herself to people, covering the worshipers with a white veil and thereby trying to protect them. In the tradition of Russian Orthodoxy, the holiday is celebrated on October 14. However, despite divided opinions, this holiday is gratitude to all mothers for their hard work, which strengthens the institution of motherhood and fatherhood, and also develops a sense of responsibility for the upbringing of the younger generation.

On Mother's Day, congratulations are given to all women who have experienced the joy of motherhood or who are just preparing to become mothers.

The Order of the Mother in Belarus is awarded to women who have given birth and raised 5 or more children, besides, the fifth child must reach the age of 1 year, and the rest of the children must be alive.

Statistics of the Republic of Belarus shows that 53% of the female population lives on its territory. 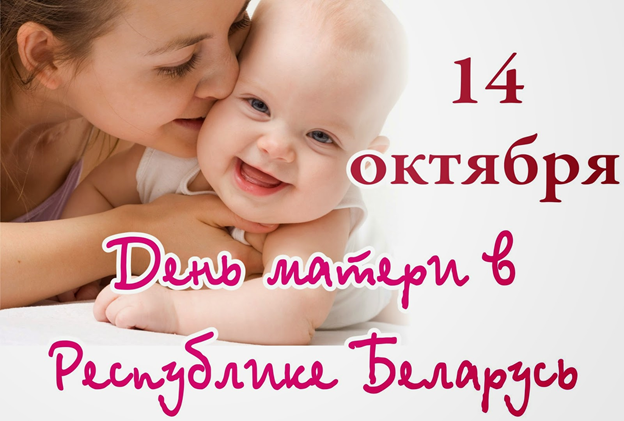