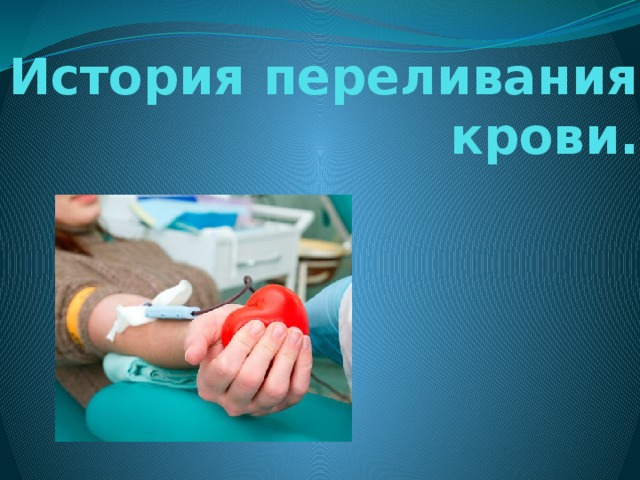 The history of blood transfusion goes back to antiquity – it was then that people began to pay attention to the fact that human death occurs with severe bleeding. Humanity has been convinced of the miraculous power of blood since ancient times. Blood began to be considered the carrier of life, and in practice, people started to give a sick person to drink the blood of an animal or human. Blood was used for medicinal purposes during the wars. For example, the Egyptian troops were always followed by herds of sheep, whose blood was used to heal the wounded. The ancient Greek king Constantine who suffered from leprosy used blood to take medicinal baths. For many centuries it was believed that blood drunk can replace blood that a human has lost due to injury or illness. 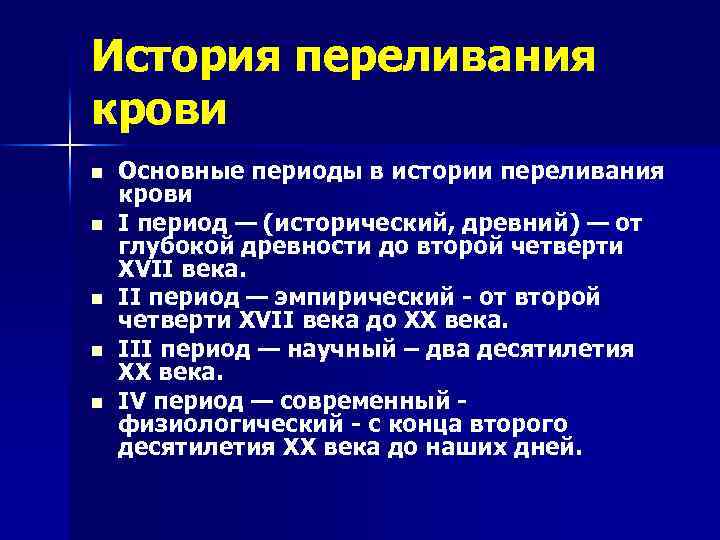 The history of blood transfusion can be divided into 4 periods. The first period lasts from ancient times to the discovery of the blood circulation law made by W. Harvey (1628), the second, empirical – to the discovery of the isohemagtlutination law made by K. Landsteiner (1901), the third is associated with the solution of two cardinal problems – with the discovery of the isohemagglutination law and the use of a blood stabilizer (1901-1919), the fourth period should be called modern, or scientific, with a scientific understanding of views on blood and its parts, as well as the search for full-fledged substitutes for the components of blood. This period continues up to the present. 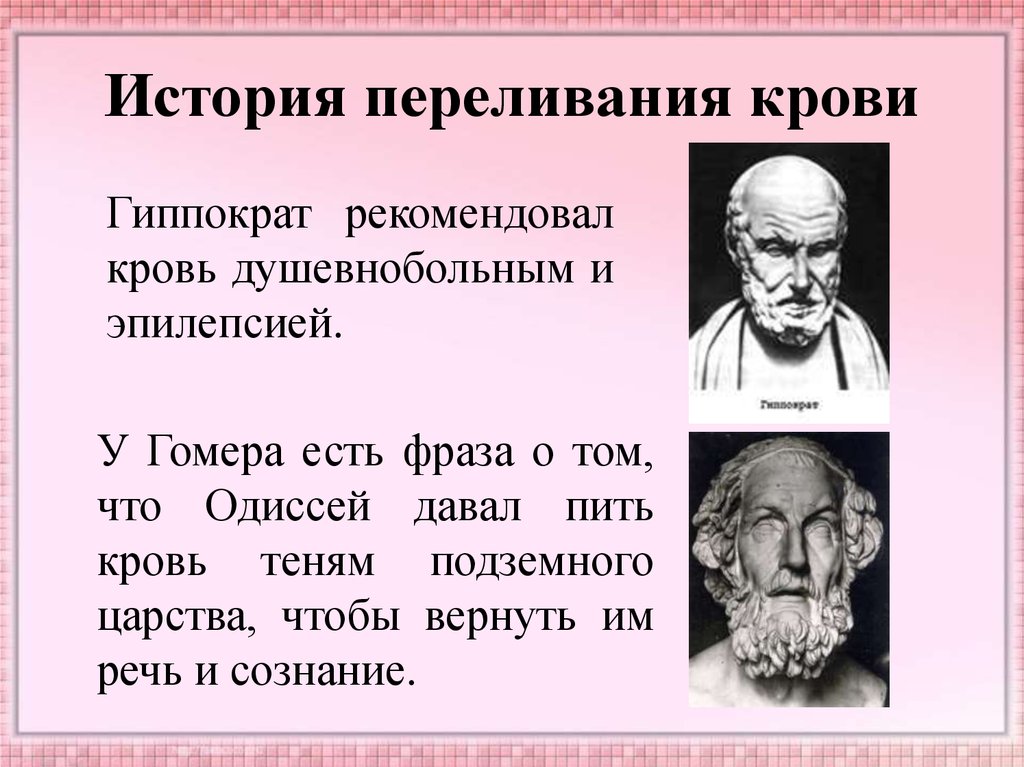 In ancient times, there were attempts to use blood for the treatment of various diseases, since, according to the concept existing at that time, a soul was located in a person's blood. The blood used for the treatment was taken internally. Hippocrates (460-370 BC) proposed to treat mental illness with this method. Historians of antiquity – Pliny (Naturae Historiae), Celsius (De re medica) – reported that epileptics and old people drank the blood of dying gladiators for treatment and rejuvenation. All this is reflected in classical literary works. Homer's Odysseus gave shadows of the underworld to drink blood in order to restore their speech and consciousness. In the work of Ovid "Metamorphoses" (1st-2nd century AD), Medea invites the daughters of Peleus to release the blood of an elder father and fill his vessels with the blood of young men. The unusual fact about the "transfusion" of blood made to Pope Innocent VIII for rejuvenation (1492) has come down to us from the Italian historians Villar and Sismondi. The doctor took blood from three boys, ten years old, to prepare medicine for the Pope. This experiment ended sadly: children died from anemia, the Pope died from old age.

A new stage in the history of blood transfusion begins with the discovery in 1628 of two blood circulation circles made by William Harvey (W. Harvey, 1578-1657). In 1654, Folli from Poppi, Italy, sent a letter to the ruler of Tuscany, in which he offered to make blood transfusions from people using silver or gold cannulas. The letter remained unanswered. Only in 1935 members of the First International Blood Transfusion Congress paid tribute to this idea and attached a plaque to the house where Folly lived. Many other less reliable facts are also known. 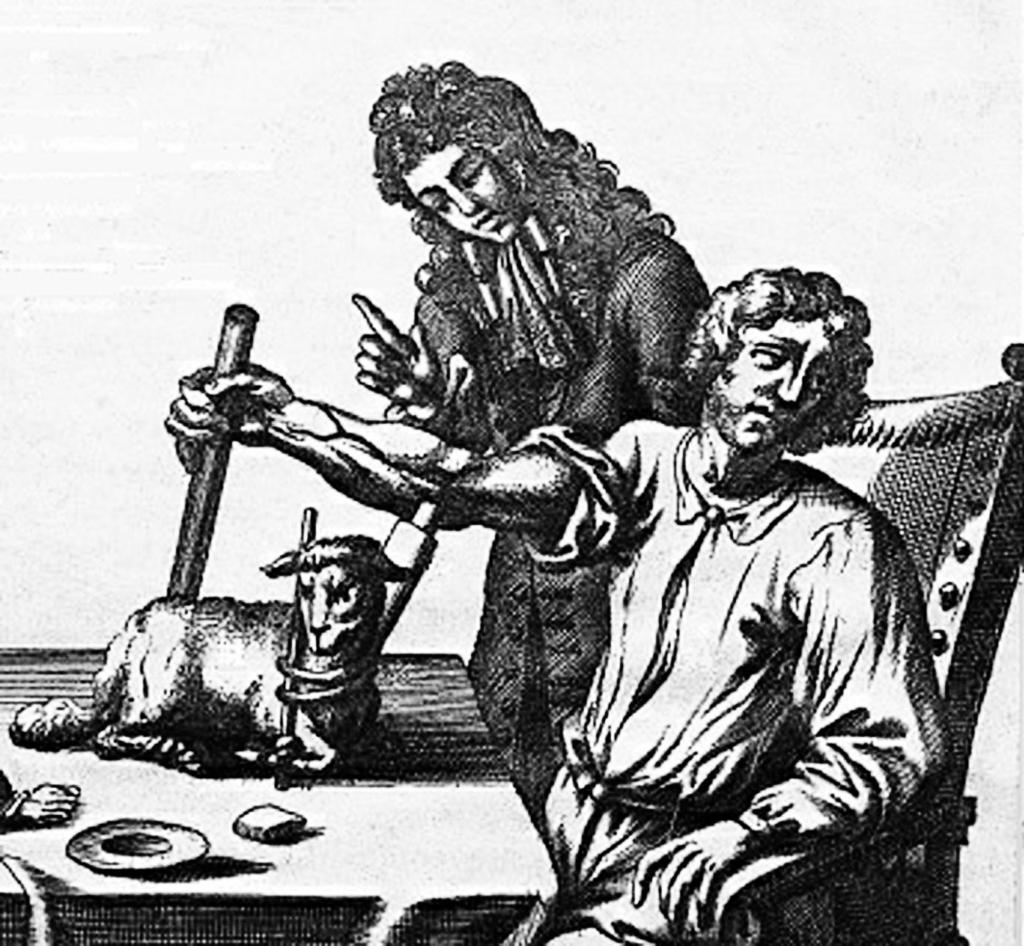 According to the literature, the first blood transfusion to animals was carried out by the Englishman Richard Lower (R. Lower, 1631-1691), who in 1665 completely replaced the blood of one dog with the blood of another, and later transfused the blood from the dog to a human. However, now it has been proven that similar experiments were carried out by the Italian physician Gerolamo Cardano (J. Cardano, 1501-1576). Based on the results of the experiment, he believed that blood transfusion could be carried out in case of acute bleeding. This idea and subsequent experiments gave impetus to the series of experiments on blood replacement. The first blood transfusion to humans (1667) is associated with the names of J. -B. Denis, later professor of medicine, and surgeon Emmerez, who performed a blood transfusion from an animal (lamb) to a human. Later J.-B. Denis made several more similar transfusions. He wrote: "Animals do not spoil their health either by excess in food and drink or by strong passions; violence can be used against them, which is impossible and dangerous to do with people; animals can be prepared for this operation with proper food, and if the milk and meat of animals are nutritious food for sick and healthy people, so why not to use their blood?". For the first time, the intravenous infusion was made by Christopher Wren (1632-1723), a member of the Royal Society of London (the world's first Academy of Sciences), using a bird's pen (instead of an injection needle) and bubbles of fish and animals (instead of a syringe). (Quoted from A. Zilber, 1999). Numerous experiments of a different nature have brought, along with successful results, a number of failures. This led to the fact that in 1670 the Chamber of Deputies of France adopted a decree that banned experiments on blood transfusion. In 1675, the Vatican issued an edict forbidding blood transfusions. The ban slowed down the study of this issue for a long time.

In 1819, the Englishman James Blundell (1790-1877) for the first time in history made a blood transfusion from human to human. The peculiarity of the technique used by J. Blundell was that the blood was heated in a specially designed apparatus and thus its coagulation was slowed down. In addition, he suggested that blood should be injected slowly, observing the patient's condition. 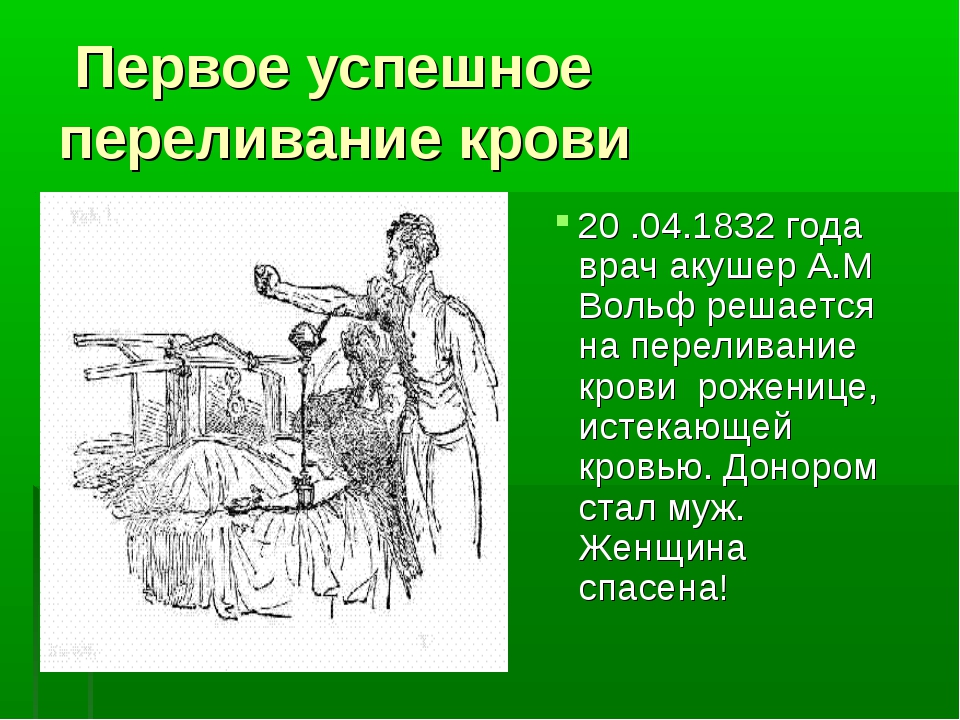 Using the instruments invented by Blundell and his technique, in 1832 the Russian obstetrician Andrei Wolf managed to save a woman in labor with severe postpartum hemorrhage. In 1840, under the leadership of Blundell, English physician Samuel Armstrong Lane first used blood transfusion to treat hemophilia. However, despite clear progress, the rate of failed transfusions was still very high, and blood transfusion was recognized as an extremely risky method. 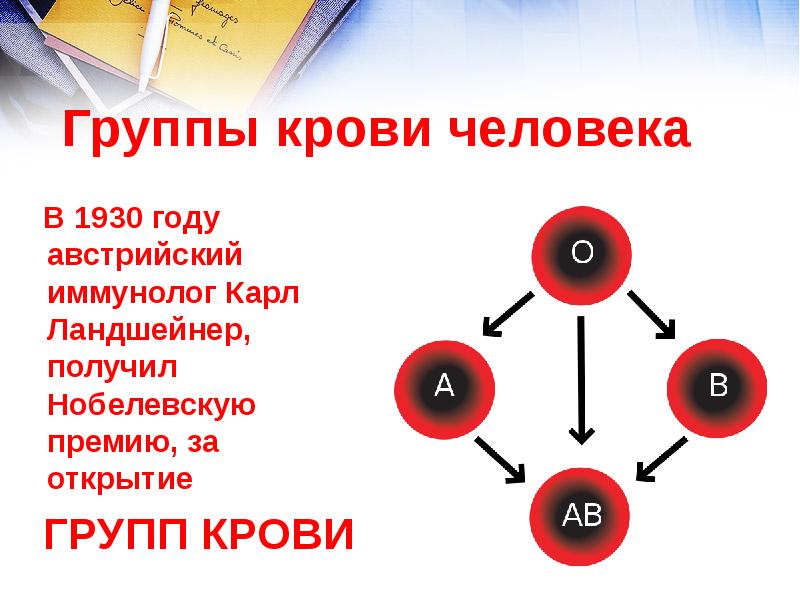 In 1900, the Austrian physician Karl Landsteiner discovered and described the first three blood groups – A, B and C. This was a real breakthrough in the field of transfusiology, and Karl Landsteiner's work was highly appreciated: in 1930 he won the Nobel Prize.

All these discoveries gave a powerful impetus to research in the field of blood cross-compatibility, and in 1907 in New York, the first blood transfusion was made to a patient from a healthy person with a preliminary screening of the donor's and recipient's blood for compatibility. The doctor who performed this transfusion, Ruben Ottenberg, eventually drew attention to the universal suitability of the first blood group.

The following years were marked by major research in the prevention of blood clotting, both surgically and chemically, and in blood preservation and storage.

Another important discovery was made by American doctors Roger Lee and Dudley White. They empirically proved that blood of the first group can be transfused to patients with any group, and patients with the fourth blood group are suitable for any other blood group. This is how the concepts of "universal donor" and "universal recipient" appeared. 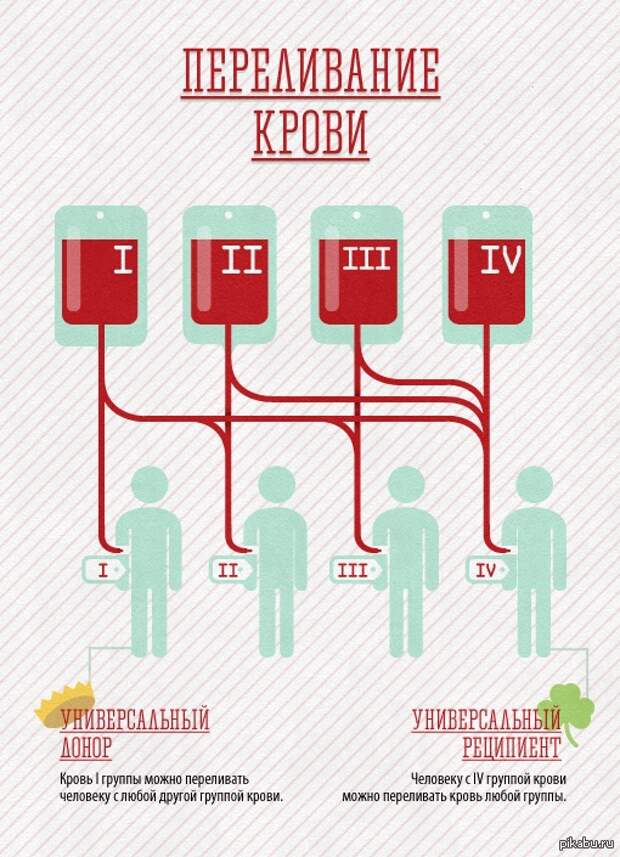 The use of a solution of sodium citrate and glucose made it possible to store blood for several days after donation, and thus create a certain supply of it in case of the need for multiple transfusions. Mass blood transfusions were first used during the First World War in England.

In the future, the practice of blood transfusion was widely used only in the 20s of the last century. In the Soviet Union, the first scientifically substantiated blood transfusion with consideration of its group affiliation was made on June 20, 1919 by the prominent Russian and Soviet surgeon Vladimir Shamov.

This was preceded by a lot of preparatory work on the creation of domestic standard sera for determining the blood group. Simultaneously with the introduction of the clinical practice of blood transfusion, the development of the institution of donation became topical.

The first blood transfusion in Belarus was performed In 1923 at the 2nd Soviet Hospital of Minsk by M. Shapiro (1884-1970), an assistant of the Department of Hospital Surgery of the Medical Faculty of the Belarusian State University, who later became the professor and director of the Minsk Medical Institute and at the same time the director of the Research Institute of Orthopedics and Reconstructive Surgery and the chief surgeon of the Ministry of Health of BSSR. Blood was transfused to the patient from the hospital nurse during gastric ulcer resection.

A. Malinoŭski (1873-1928), from Sakolka, Hrodna region, made a decisive contribution to the development of transfusiology on a global scale. A revolutionary and writer, a friend of Lenin and Gorky, philosopher, chess player, physicist, cyberneticist and also a doctor, he performed life-threatening experiments on blood transfusion in the spirit of the best medical traditions of the past centuries. Such a large-scale personality could appear only at the beginning of the twentieth century, seething with revolutionary ideas. One of his party pseudonyms is "Bogdanov", which, according to the existing tradition, replaced his real name. In 1926, the world's first blood transfusion institute was opened in Moscow, and A. Bogdanov was appointed its director.

In Minsk, blood transfusion in the 1920s was carried out by individual doctors using artisanal methods. At the end of 1931, on the initiative of Associate Professor Ju. Irger, the team of donors was organized in the 1st Surgical Clinic from the students of the Minsk Medical Institute. In the same year, 7 blood transfusions were carried out from them.

In modern conditions, transfusiology is constantly being improved and developed using the achievements of science and technology.

Head of the transfusiological care cabinet