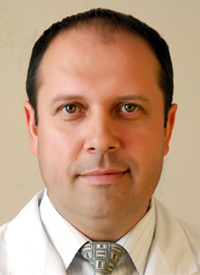 The age of a whole generation of people who have gone through practical school in the hospital and gained experience in solving therapeutic, diagnostic and organizational problems. The 4th City Clinical Hospital named after M.Ja. Saŭčanka was and remains the leading clinical base for training medical specialists of such major institutions as the Belarusian State Medical University and the Belarusian Medical Academy of Postgraduate Education.

The 4th Clinical Hospital of Minsk was opened on October 1, 1960 by the decision of the Executive Committee of the Minsk City Council of Workers' Deputies of September 22, 1960 № 499. 1954 was the beginning of the construction of the hospital. 1957 – a 3-storey (therapeutic) building was commissioned where the antitubercular dispensary and a inpatient with 140 beds were opened. The management of the hospital from the moment of its organization was carried out by the chief doctors: Sieĺdzimirava Aliena Michajlaŭna from 1957 to 1976, Barčanka Aliaksandr Cimafiejevič from 1976 to 1983, Harbataŭ Uladlien Jeŭstaf́jevič from 1983 to 1999, Krućjanaŭ Mikalaj Fiodaravič from 1999 to 2001, Trajanaŭ Aliaksandr Anatoĺjevič from January 15, 2002 to March 2016.

By the Resolution of the Council of Ministers of the Republic of Belarus of November 6, 2001, № 1623, memory of an academician Mikalaj Jaŭsiejevič Saŭčanka was commemorated and the hospital was given his name, a memorial plaque is placed on the facade of the urological building.

The treatment and diagnostic process in the hospital is carried out with the participation of the following departments of BSMU: of urology, military field surgery, clinical pharmacology, anesthesiology and reanimation, internal diseases № 3, otorhinolaryngology. The clinic is a base for training nursing staff.

Together with the scientific staff of the Republican Scientific and Practical Center “Cardiology”, new medical technologies are being introduced in the treatment of cardiovascular diseases.

Here were clearly manifested the scientific, pedagogical and clinical activities of the founder of thoracic surgery in the Republic of Belarus, Professor Maslaŭ Piotr Mikalajevič.

In the hospital, for the first time, Professor Šot Aliaksandr Uladzimiravič developed an operation on correction aortic valves with an artificial valve.

With enthusiasm medical students listened to the lectures of a young professor, later the founder of the Research Institute of Cardiology, an academician Sidarenka Hieorhij Ivanavič.

For many years in the 4th ССH worked fruitfully Mikalaj Jaŭsiejevič Saŭčanka, an academician of the national academy of the Republic of Belarus, laureate of the State Prize of the USSR and the BSSR, Professor, Doctor of Medical Sciences, organizer of the urology department at the MSMI. Having been heading the Ministry of Health of the BSSR for 20 years, M.Ja. Saŭčanka made a great contribution to the development of the fundamentals of the new direction in Belarusian urology and public health in general, by the Resolution of the Council of Ministers of the Republic of Belarus № 1623 of 6.11.2001 the memory of academician M.Ja. Saŭčanka was commemorated and the 4th City Clinical Hospital was named after him.

Currently, the 4th City Clinical Hospital named after M.Ja. Saŭčanka is a multidisciplinary medical and diagnostic institution with high scientific and practical and professional potential of both iatric and medical personnel with secondary specialized education. In the hospital, 82.5% of the doctors and 75% of the nursing staff were certified for qualification categories. Six doctors have a degree of candidate of medical sciences. In 2004, the City and in 2014 the Republican Urological Center was created. Until April 15, 2010 the only kidney transplantation department in the Republic was functioning in the hospital.

It was on the basis of the 4th CCH on September 12, 1971 when the first kidney transplant operation was performed in our country.

The Department of Vascular Surgery, which was opened in February 2003, is the urban center for vascular surgery.

Since 2003 the first state self-supporting department of plastic and aesthetic surgery has been operating. Plastic operations on the face are performed – blepharoplasty, rhinoplasty, otoplasty, lifting, etc., as well as breast surgery (changing the size and shape), body correction operations (abdominoplasty, liposuction, plastics of the thighs, shoulders, elimination of body defects, adipose tissue transplantation). Injection techniques for contour correction and minimally invasive interventions for age-related changes in the face and body, vein diseases are also performed. The department has its own operating room, the necessary equipment, chambers of increased comfort for round-the-clock monitoring of patients.

The newest medical technologies formed the basis of the department’s activities: X-ray-shockwave remote stone crushing and endoscopic surgery, surgical separation, ultrasound diagnostics, hemodialysis, isotope laboratory and many other departments. The medical departments of Cardiology and Nephrology have high prestige among colleagues and patients of the hospital. With the opening in 2014 of the angiography room, the possibilities for the diagnosis and treatment of cardiovascular diseases have significantly increased.

The Healthcare Institution «4th City Clinical Hospital named after M.Ja. Saŭčanka» of Minsk is at the stage of reconstruction. A new building for auxiliary purposes was commissioned. A modern therapeutic building with 300 beds is under construction. Reconstruction of the urological building has been planned.

Our hospital is a modern medical institution capable of providing medical care at the highest international standards. We will try to direct our activities in order not to lose and increase the existing half-century medical traditions.

The 4th City Clinical Hospital named after M.Ja. Saŭčanka is the clinical base for training medical specialists of such major institutions as the Belarusian State Medical University and the Belarusian Medical Academy of Postgraduate Education.

The treatment and diagnostic process in the hospital is carried out with the participation of the departments of BSMU:

Under the leadership of the scientists of the Republican Scientific and Practical Center "Cardiology", headed by professor Mročak A.H., new medical technologies are being introduced in the treatment of cardiovascular diseases.

At present, the 4th CCH named after M.Ja. Saŭčanka is a multidisciplinary medical and diagnostic institution with high scientific, practical and professional potential of both medical and nursing staff. In the clinic, about 90% of doctors and about 75% of average and medical personnel are certified for qualification categories.